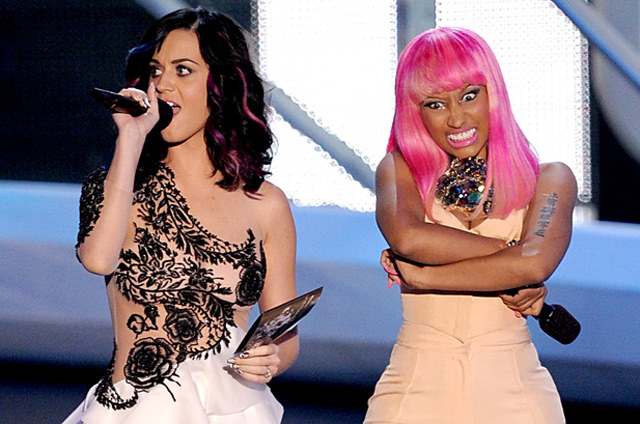 Katy Perry is continuing to collaborate with rappers–her latest is “Swish Swish” featuring Nicki Minaj. This marks the third release from her upcoming album, Witness, which is due June 9. In February she dropped “Chained to the Rhythm” and followed it up last month with “Bon Appétit,” the umpteenth grab for radio this year to feature Migos. Neither have performed exceptionally well on the charts, so we’ll see if teaming up with Nicki finally does the trick.

After serving up a tasty dish of sweet revenge in the Migos-featured “Bon Appétit” video, Katy Perry is back with her next follow-up single. Titled “Swish Swish,” the 32-year-old pop superstar drops a fun dance record, which features a guest appearance by Nicki Minaj.Along “Bon Appétit,” fans who pre-order Katy Perry’s newly announced Witness LP will receive “Swish Swish” as a free download. Music lovers won’t have to wait long for Perry’s fifth studio album, set to hit stores on June 9.

Pink Ferragamo sliders on deck
Silly rap beefs just get me more checks
My life is a movie, I’m never off set
Me and my amigos (no, not Offset)
Swish swish, aww I got them upset
But my shooters’ll make ’em dance like dubstep
Swish, swish, aww, my haters is obsessed
‘Cause I make M’s, they get much less